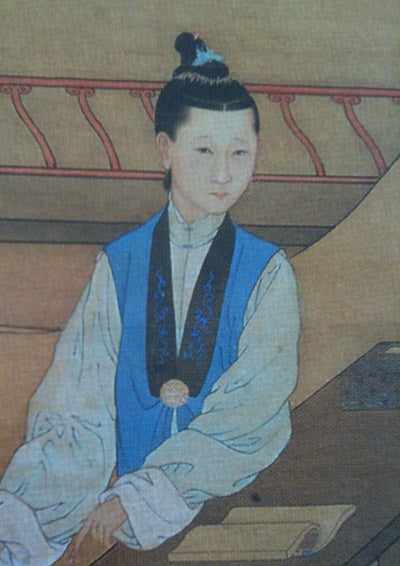 Li Qingzhao, 12th-century Chinese poet, is the subject of a new book by Ronald Egan, Confucius Institute Professor of Sinology at Stanford.
Li Qingzhao was born 1084 in Zhangqiu, Shandong province. She originated from a noble scholar-official family and was exposed to many modes literature as a child. She is, today, known as the greatest female writer in premodern China and her poems primarily focus on her solitude while her husband was away. She masterfully employs the use of wine and intoxication and wrote extensively about imagery and her surrounding environment, with a connection to nature as well. Much of her work was lost or remains in fragments, and only about a hundred of her poems have survived. Nonetheless, her poems remain one of the most popular bodies of work in premodern Chinese history and is continually studied by scholars to this day. ​
Themes: Nature, Isolation

Our theme of dreams is represented in the poem when it begins with “I remember”, which signifies that the speaker is recollecting an experience or a series of experiences that occurred in the past. To pair, there is a focus on wine as the impetus for the free-spirit, altered state that the characters are experiencing. The alcohol promotes a pleasurable evening that is full of freedom and fluidity, as the companions are not concerned about the time. Additionally, wine engenders a certain excitement and dreamlike wonderland that stimulates the emotions in the characters’ as well as a certain level of wandering and forgetfulness. She describes a tranquil, rich imagery of lotus blossoms and a sand bank of gulls and egrets that is disrupted by the pair, as the influence of alcohol and the comfort of physically being in a carefree state. This beautiful setting is surrounded by nature, and her and presumably her lover both enjoy outdoor activities in which they are engrossed with their surroundings. While different than the sorrow that drinking wine promotes when in a certain state of mind as well as a quest for immortality, Li Qingzhao deliberately uses wine in combination with a remembrance of the past to show the vitality and youthfulness of the young couple as well as to express a return to nature and the freedom it offers.

As autumn approaches winter and the speaker thinks about the double Ninth festival, she is reminded of the loneliness she experiences without her lover. She makes all the preparations for the festival, such as trying on a new dress and visiting the golden flowers, and tasting the new green wine, but yet the only element that is missing is her deep-rooted love for her companion who is not present. She indulges herself in wine but the alcohol brings about this reinforcing cycle of grief that is buried inside her heart, meaning that this pain is long-seated, ongoing, and ever-present. As winter approaches and the weather gets colder, one relies on the company and love from a romantic partner, but yet this woman is left in her sorrow. Nature serves as a reminder of the changing of the seasons and the passing of time, but also is an inhibitor for the woman’s happiness because it brings about anxiety and depression. She dreams about her lover, and although nature usually represents renewal in the sense of beauty, in this case it serves the function of introducing a bleak atmosphere for the speaker and the sorrows of her past.